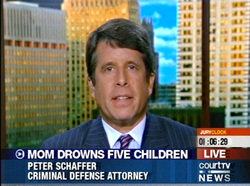 PETER J. SCHAFFER has been a practicing criminal trial lawyer since 1987. During the course of his career, he has defended well over two thousand adults, juveniles and organizations charged with crimes in New York, Connecticut and in the United States District Courts. While some attorneys may handle a variety of legal matters, Mr. Schaffer devotes his practice exclusively to criminal defense and representing victims of false arrest and the use of excessive force by law enforcement (“police brutality”).

PETER J. SCHAFFER has conducted hundreds of hearings, jury and bench trials and has represented clients in numerous grand jury proceedings. He has also tried a number of civil rights cases in the United States District Courts and personal injury cases. Mr. Schaffer is a member of the National Association of Criminal Defense Lawyers and the Bronx County Bar Association. He is also a member in good standing of the Criminal Justice Administration Panel for the U.S. District Court in Connecticut and the Assigned Counsel Plan for the Appellate Division, First Department in New York City.

Mr. Schaffer has appeared on national television on The Nancy Grace Show on CNN HeadlineNews,  COURT TV, and “IN SESSION” on truTV as a guest commentator.  He has been heard on Bloomberg Radio and Sirius Satellite Radio  as an expert in criminal law and trial practice. He has also been a guest lecturer in criminal law at CUNY Law School in New York City.

PETER J. SCHAFFER is committed to providing the highest level of professional representation to his clients. If you or someone you know is charged with a Federal or State crime or is being investigated by Federal or State authorities, contact him now to schedule an initial consultation.