PETER J. SCHAFFER, Attorney at Law devotes his practice to New York State criminal defense, DWI, the defense of all federal criminal cases nationwide, and representing victims of false arrest and police brutality. Mr. Schaffer is available to appear in all New York City and surrounding County Criminal and State Supreme Courts, as well as the U.S. District Courts for the District of Connecticut and the Southern and Eastern Districts of New York.  Mr. Schaffer is particularly experienced with practicing law in the Bronx.  He has tried cases in the Bronx Supreme, Criminal and Family Courts since 1987.

With a wealth of experience handling cases ranging from simple traffic violations to complex federal death penalty eligible felonies, Mr. Schaffer uses the knowledge and skills he has developed over more than thirty-five years of trial work to help his clients achieve the best result in every case he defends.

Mr. Schaffer has appeared many times on COURT TV, The Nancy Grace Show on HLN, IN SESSION on tru TV, and on News12 The Bronx .  He has been heard on Sirius Satellite Radio and Bloomberg Radio as a guest commentator on nationally prominent criminal trials.

If you or someone you are concerned about has been arrested in New York or for any federal crime or is being investigated by any New York State or federal agency, you need an experienced criminal trial lawyer. If you or a loved one has been the victim of false arrest or police brutality, you deserve to be compensated for your injuries. Call PETER J. SCHAFFER at 718-585-4444 to schedule an initial consultation.

Peter J. Schaffer represents clients in every stage of the criminal process from investigation through appeal.  He also represents victims of false arrest, police brutality, and serious personal injury. 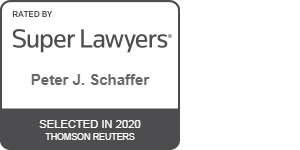